On Wednesday 5 October, I gave this public lecture (see here for slides) at the Centre for Religion, Conflict and the Public Domain at the University of Groningen.

“The rhythms of the sky have long been companions of human thought and ritual. Religions have found many ways to make sense of seasonal weather cycles, alongside the unreliable and cruel performance of the 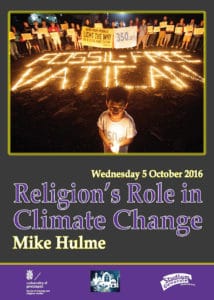 Earth’s climate. Given that all religions offer a way of ordering relations between humans, non-humans and the gods, it would be surprising if religions had nothing to say about climate change. But how does religious faith influence how people engage with the phenomenon of climate change? Answers to questions such as ‘Who or what controls the weather?’ or ‘What values shape the behaviours of people?’ are strongly influenced by our belief systems. Mike Hulme, Professor of Climate and Culture, will answer these questions drawing upon evidence from the United States (the beliefs of evangelical Christians), from Europe (the influence of last year’s Papal Encyclical), and from the Pacific Islands (the role of churches in helping communities adapt to climate risks). He argues that climate change is not primarily a physical process that must be stopped, but a stage in the cultural evolution of the idea of climate. Ignoring the role and influence of religion in climate debates is another form of climate denialism”.

My other web presence

This website uses cookies to improve your experience while you navigate through the website. Out of these, the cookies that are categorized as necessary are stored on your browser as they are essential for the working of basic functionalities of the website. We also use third-party cookies that help us analyze and understand how you use this website. These cookies will be stored in your browser only with your consent. You also have the option to opt-out of these cookies. But opting out of some of these cookies may affect your browsing experience.
Necessary Always Enabled

Performance cookies are used to understand and analyze the key performance indexes of the website which helps in delivering a better user experience for the visitors.

Analytical cookies are used to understand how visitors interact with the website. These cookies help provide information on metrics the number of visitors, bounce rate, traffic source, etc.

Advertisement cookies are used to provide visitors with relevant ads and marketing campaigns. These cookies track visitors across websites and collect information to provide customized ads.

Other uncategorized cookies are those that are being analyzed and have not been classified into a category as yet.

SAVE & ACCEPT
Powered by